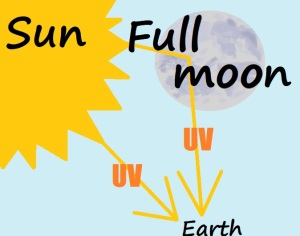 The blessed moon is doing that mirror thing again, reflecting the vibrant sun’s rays back at us fully around 5pm apparently.  It will attempt to shine forth a smile upon us all, but will it be bright and visible?  We will see Beloveds, we will see.  For here in Wales there’s a tendency to produce sun blocking clouds that hide Mr Blue Sky and often these clouds are in such abundance at any time of the year or appearing out of the blue at the drop of a hat!  If no cloud today, here’s a sunburn warning for us humans around teatime:  It’s double trouble of full sun and full moon, giving lots of UV rays!  There’ll be a need for hats, long sleeved shirts, sunscreen… or will it be rain bringing us down and the need for a brolly?  Let’s not get sunburnt!  No one wants symptoms of heat stroke or blisters or need to tend to someone with those.  So best be prepared with layers of clothes at the ready or stay out of the sun all together on those mega UV moments to avoid being called a “Numpty!”

As for knowledge sharing: The more traditional name for the first full moon in August in the UK, is called the Barley Moon.  I can’t tell you much about it, but as for growing barley in the garden to incorporate in bread, this could be an idea to get a bit of nutrition in a very fresh form.  I’ve actually seen some growing in all sorts of weird places this year.  For instance, where it’s accidentally been dropped between the edge of the tarmac on the road and the path.  That plant thrives in next to nothing!  I’ve put some in pots out the front to be all scientific about it.  Anyways, the official line is that barley is a sweet tasting cereal, cheap and quick to grow, so perhaps I will actually give it a go each year and put fresh undried grains into my bread dough on a regular, perhaps?  We will see.

Published by Over Soil

Human 🌍 View all posts by Over Soil

This site uses Akismet to reduce spam. Learn how your comment data is processed.